A fantastic day in the saddle heading into the beautiful Yorkshire Dales using part of ‘The Way of the Roses’ route – cycling through distinctive limestone hills and quiet country roads. Further on the route uses the gated road to Dent travelling along a scenic and wonderfully peaceful section of The Dales. Then, as if the Dales aren’t enough, the latter section explores The Howgills; a lesser known part of The Lake District but no less beautiful for it. (Description based on route notes from Peak Tours).

Route from Gargrave to Penrith (74 miles): 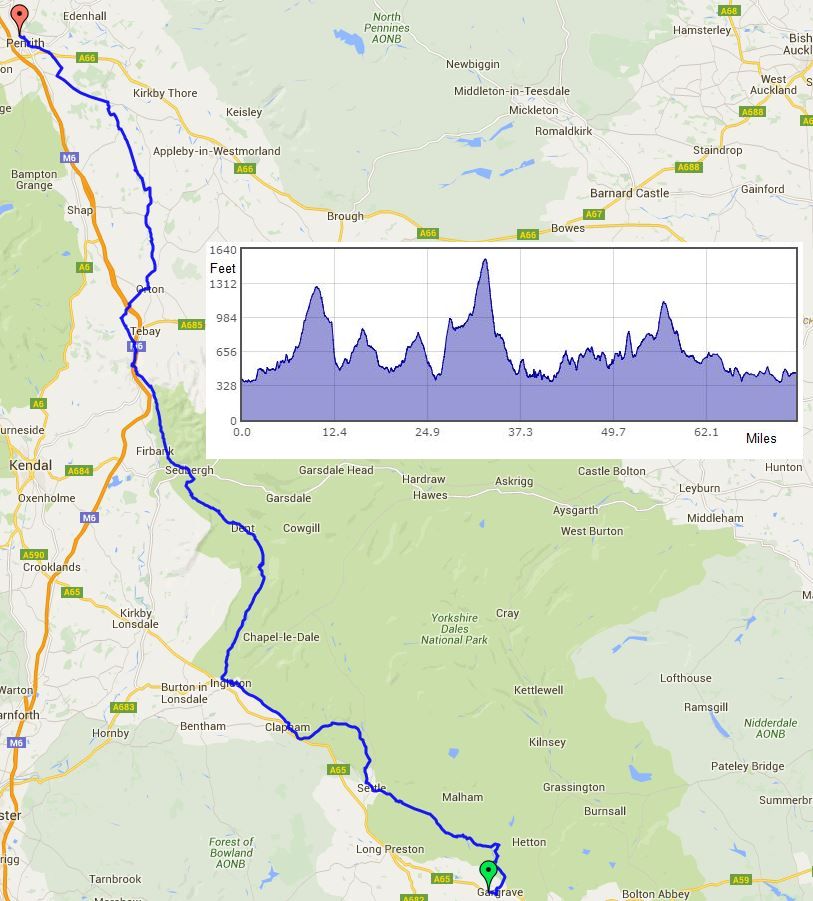 Another day setting out with waterproofs on but we never got rain – just some heavy, damp mist in the afternoon. We did get some views across the Dales but the tricky 12% average descent into Settle took full focus on the road! We passed through Ingleton before taking the challenging ‘gated road’ to our lunch stop at the George and Dragon in Dent (near Sedbergh). This route had a couple of steep 500 feet climbs that got the heart rate up a bit! There were no major climbs after lunch but the route went up and down over a lot of little steep climbs so it was quite a tiring route even before we got to the step climb out of Orton for coffee beak at the top. Thankfully it was great run down from there, through Crosby Ravenscroft and Maulds Meaburn, to Penrith. Overall we ascended for 7000 feet which is more than on any of the days on the 2013 Lands End to John O’Groats trip – however it isn’t the most on this trip as day 10 Craignure to Mallaig has even more climbing!

Like yesterday, it was not a great day for photographs but here are some videos:
Arriving in Settle

Cycling along the Dales

Cycling on the gated road to Dent

Cycling through Dent – I missed the pub for lunch & had to turn around!

View of the Dales

Approaching the Lake District near M6

Next: Day 7 – Penrith to Thornhill