Vaison-la-Romaine to Sault via Mont Ventoux! 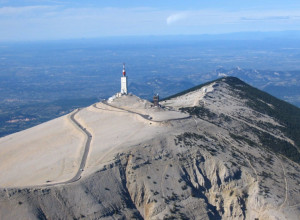 For those who don’t watch the Tour de France, Mont Ventoux is an iconic mountain for cyclists and in July 1967 it achieved worldwide notoriety when the British cyclist Tom Simpson died near the top (from a combination of a stomach upset, alcohol, amphetamines and heat exhaustion). Nowadays the unremitting ascent to the summit of this isolated wind-swept mountain produces fantastic helicopter footage during the Tour de France. The two main climbs to the top of Mont Ventoux are from Malaucène and from Bédoin. Both are about 21.5 km long with average gradients of just over 7%. The maximum gradients are ~11% & ~12% and the total ascent is ~1550 m & ~1600 m respectively (there are more details and a height profile at the VeloVentoux website).

Route for the first ascent of Mont Ventoux (Vaison-la-Romaine to Malaucène then up Mont Ventoux & down to Bédoin, 35 miles): 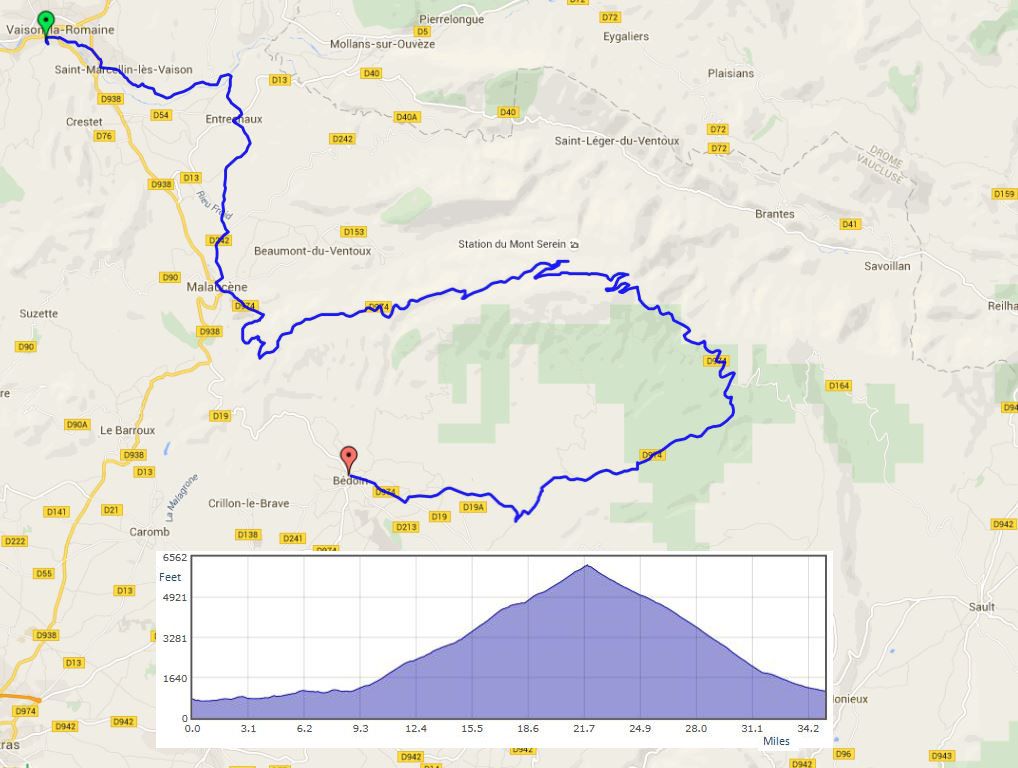 For the initial climb of Mont Ventoux I left early from Vaison-la-Romaine with lots of liquid and sugary foods! Immediately you are aware of Mont Ventoux looming ahead as it dominates the region due to its isolated position in the Rhône valley. In fact we had seen it in the distance well before we had reached Vaison-la-Romaine the day before. After cycling the 9 miles to Malaucène I had a brief food & drink stop in the town before setting out from Malaucène at 7.30 am before the day got too hot. I then cycled ‘non-stop’ up the ~12 miles of unrelenting climbing trying to keep above my 6m/hr target pace needed to beat 2 hours. It took 1 hour and 48 minutes in total which is not too bad considering the best professional cyclists take about an hour! At the top there was time for a few photographs before going to the summit restaurant for more water, a coffee and a very large piece of blueberry cheesecake! Then it was a fast 30 minute descent down into Bédoin. 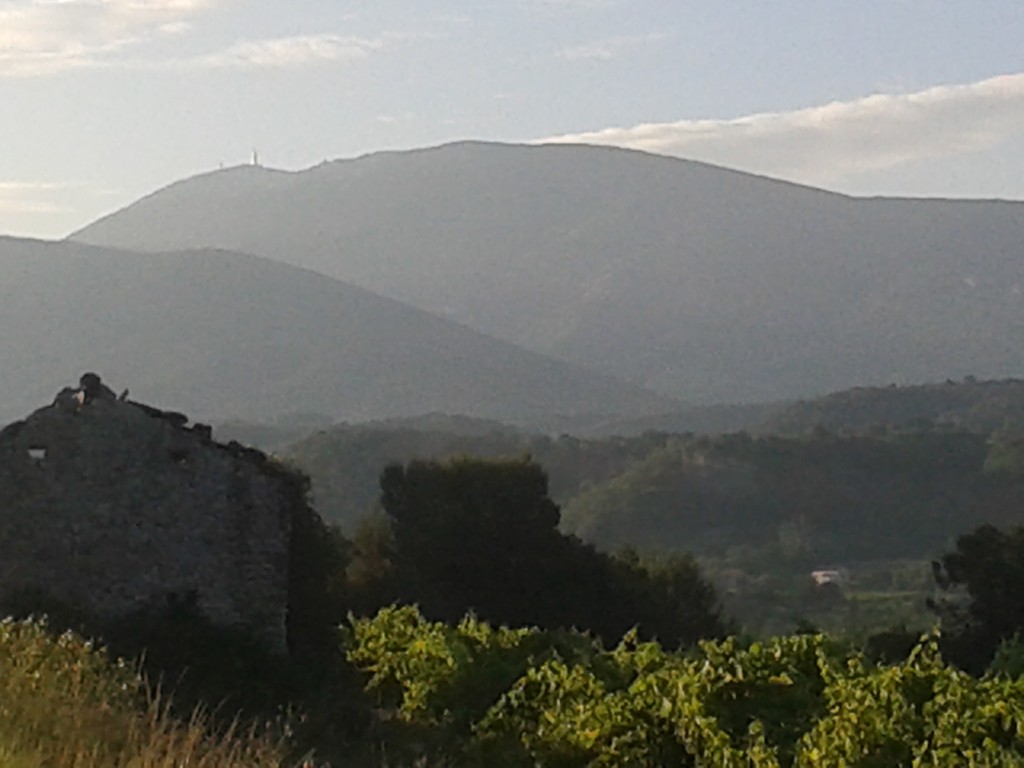 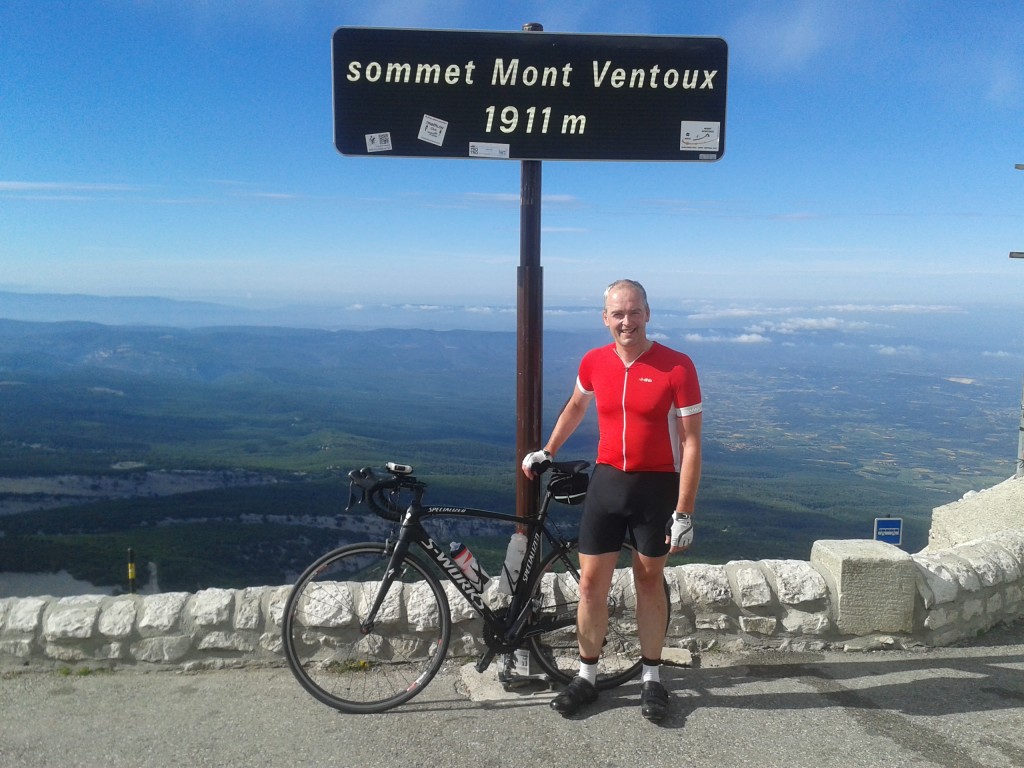 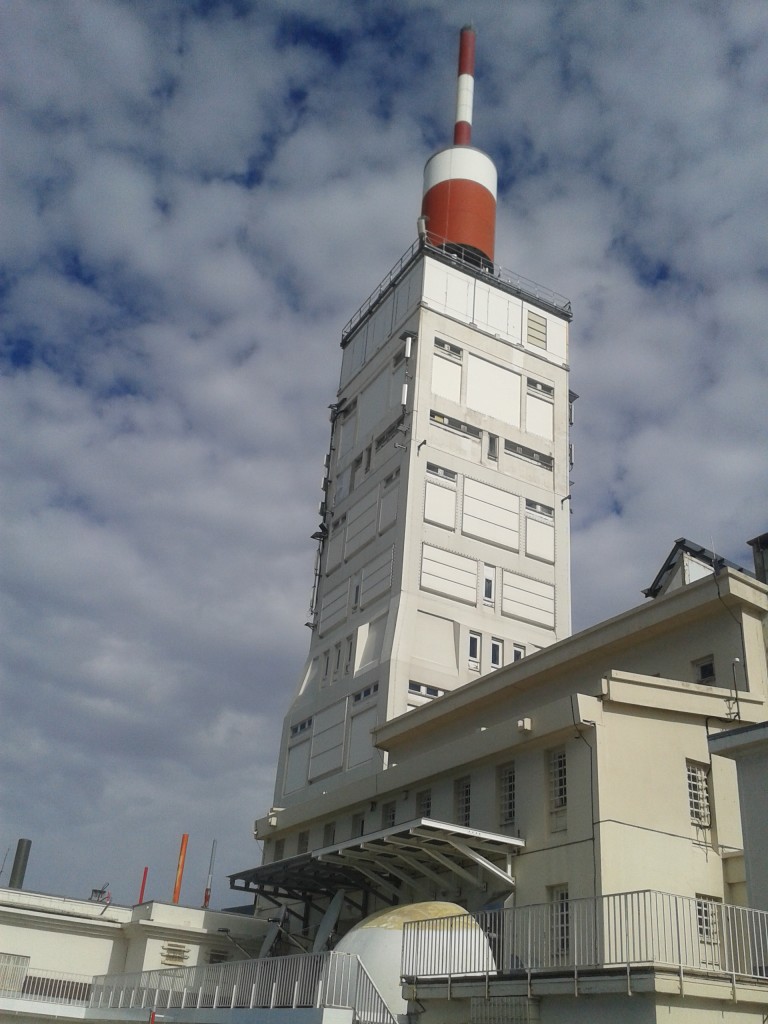 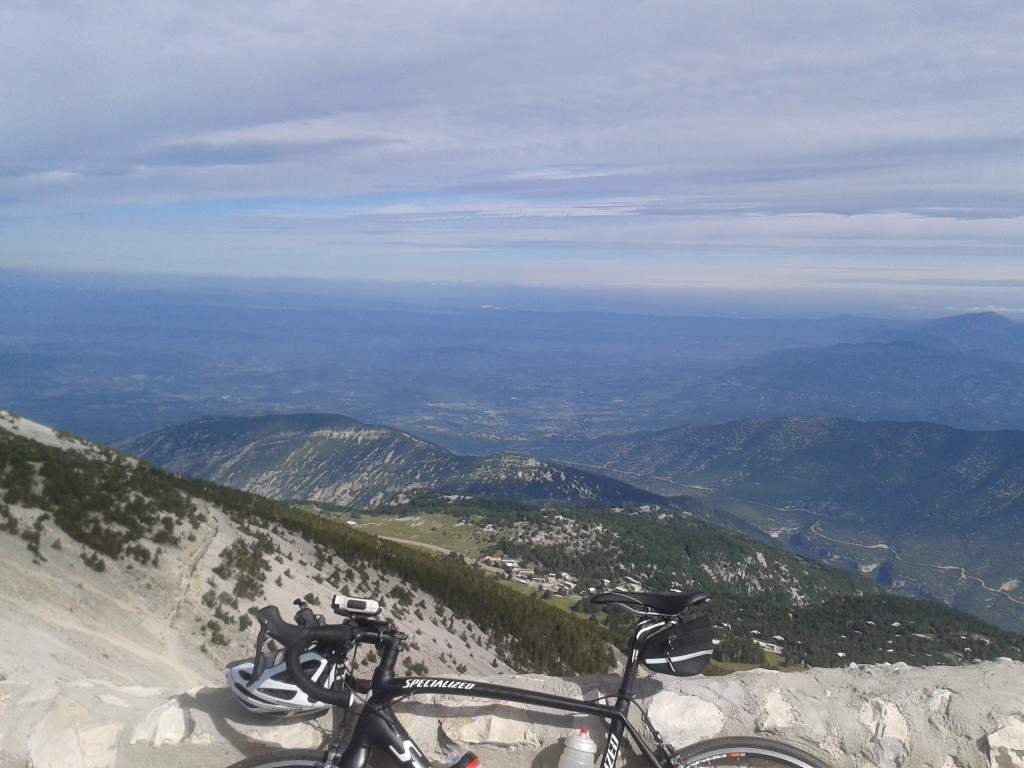 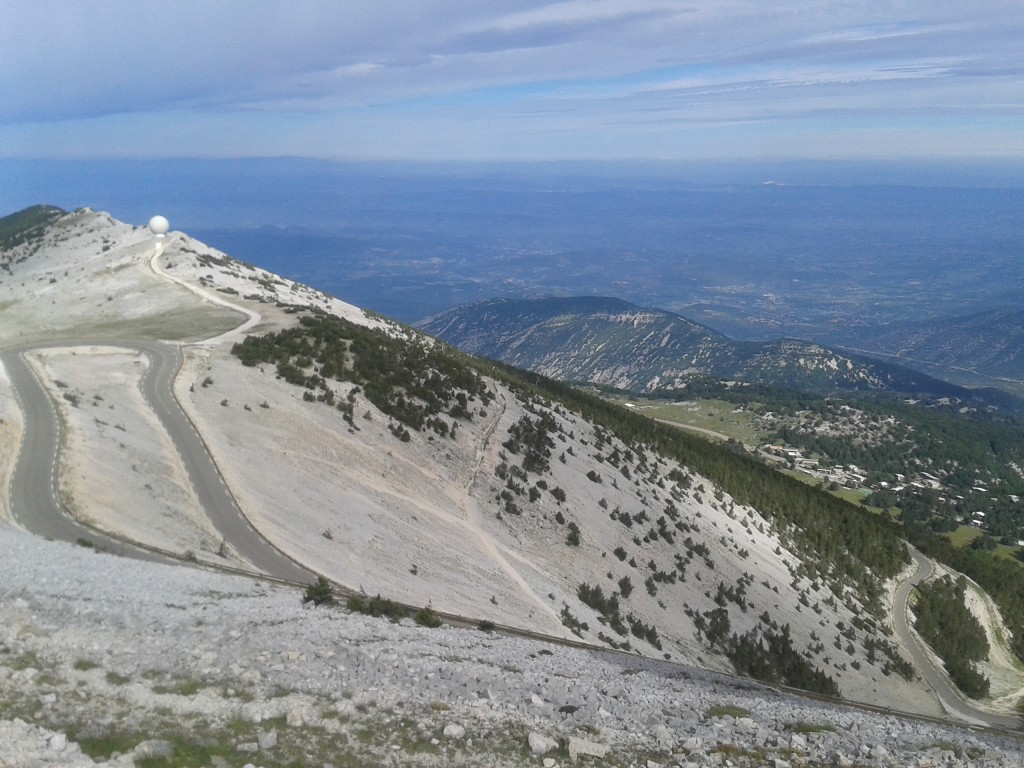 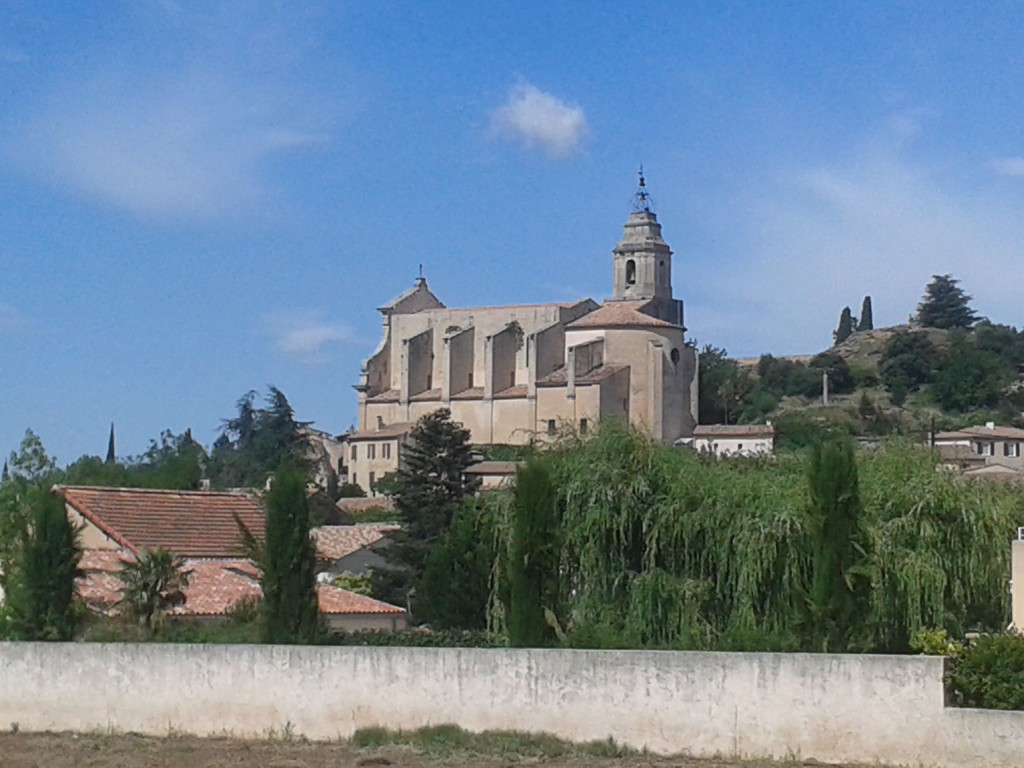 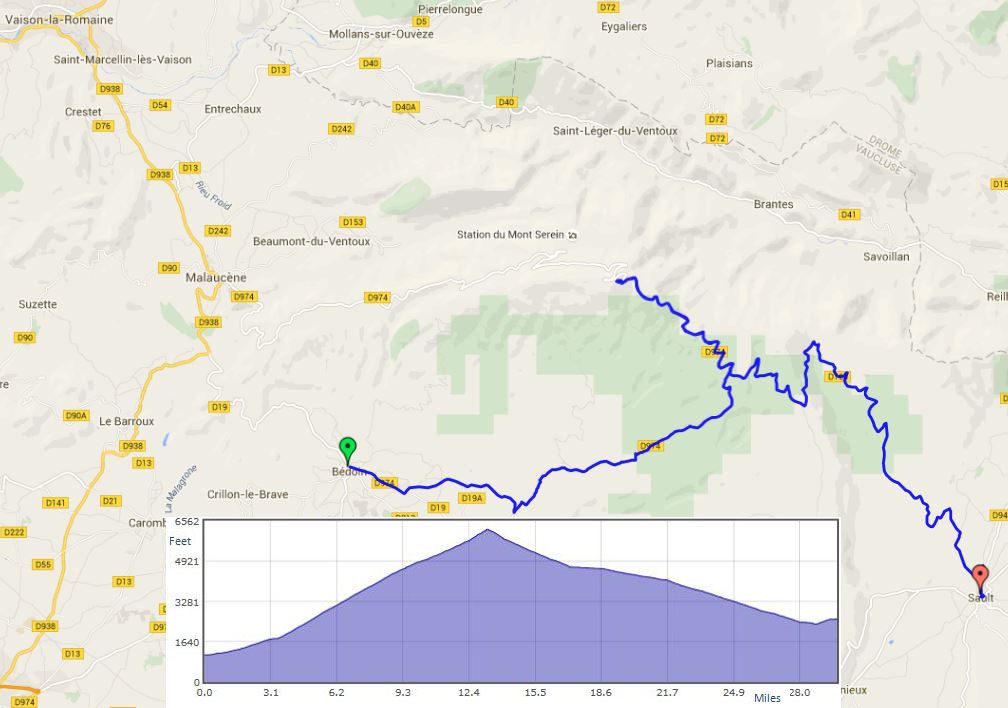 You might well ask why do a second ascent? One answer is that nearly 10,000 cyclists have done three ascents in one day (includes the third slightly ‘easier’ one from Sault) to become a Cinglé du Mont-Ventoux – literally a lunatic or crackpot of Mont Ventoux! There is even a group of ~140 cyclists who have done all three route twice in the one day to become Bicinglé du Mont-Ventoux!! My reason was that the Bédoin climb is the ‘classic’ Tour de France route to the top, due to the challenging steeper parts in the middle of the climb through the forest and then the last exposed 4 miles where it can be extremely windy. After all that is why it is called Mont Ventoux.

Leaving Bédoin at about 10.00 am I found the initial climb was relatively easy but as I reached the forest I really began to think I had ‘bitten of more than I could chew’. A rather apt expression, as by then I was so sick of drinking and eating sickly sweet energy drinks and food that I had to pause each time I needed sustenance. Since that day I haven’t eaten a single Jelly Baby and those used to be my favourite energy boost while out cycling. Eventually after about 8 miles I reached Chalet Reynard restaurant and met up with quite a few of the others from the Peak Tours group where we had a well-earned coffee break. After recovering I set out to do the last third of the Bédoin climb through the exposed limestone area. This climb took a total of 2 hours 40 minutes which surprised me as that was also less than 2 hours climbing, albeit with a 45 minute coffee break to recover at the restaurant. Then, after a visit to the Tom Simpson memorial near the top, it was back down to Chalet Reynard for another coffee stop. On leaving the restaurant this time I took the fork in the road down the third route off the mountain to Sault – a leisurely cycle through the forest and the fields of lavender.

Next: Day 12 – Sault to Moustier-Ste-Marie

Back to the C2M main page